A sparkling chlorine free pool, exceptional bilingual instructors and ideal lesson levels. Getting into our water is a great experience for you and your family. 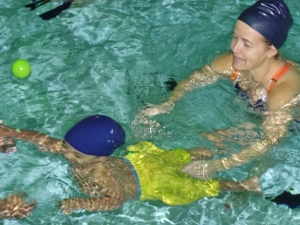 Waterbabies
A movement and adjustment experience in the water for children from 4 months to 2 years. This class is designed to alleviate fears children have concerning the water and to provide a “First Stroke” in a safe aquatic environment.

Minnows- Water Exploration (Level 1)
Child must be at least 2 years of age to participate in class. The objective of this class is to help the child feel comfortable in the water. Skills that will be introduced will be water adjustment, breath control, buoyancy, entering/exiting the water unassisted, front/back kicking with support, and using arms for short distances. Basic safety will be introduced as well.

Gold Fish – Primary Skills (Level 2)
Child must be able to accomplish all of the skills in level 1 to enter level 2. Class will learn how to fully submerge and retrieve objects, increase breath control, glide, float on front/back without support, and flutter kick on front/back.

Dolphins – Stroke Readiness (Level 3)
Child must be able to accomplish all skills in level 1 and level 2. The objective of this class is to build upon the skills learned in previous levels. The front and back crawl will be taught and practiced extensively. Introduction to elementary backstroke and fundamentals of treading water will also be covered.

Sharks – Stroke Development (Level 4)
The objective of this class is to develop confidence in the strokes learned thus far and to improve other aquatic skills. Class will increase their endurance by swimming strokes at greater distances than in level 3. Introduction of the breast stroke and basics of turning at the wall will also be taught.

Whales – Stroke Proficiency (Level 5)
The objective of this class is coordination of skills and refinement of all swim strokes taught. Strokes will be polished so students swim with more efficiency and smoothness over greater distances. Class will develop exceptional endurance at course end.

Annabelle is an excellent swim instructor and trainer. Her interaction with children who are learning to swim is fantastic. My 2 children have learned more in 2 swim lessons with Annabelle than a month of lessons with the other places I have taken them to. Please let her know what a great job she’s doing.

I wanted to write a note of appreciation for Lauren’s patience and kindness towards Harper these last couple months at swim. She handled Harper’s nervousness with an approach that helped her to feel comfortable in the water while also getting her to push herself to finally get her face in the water! Amazing!
Between you, Lauren and the rest of the instructors, I can’t say enough good things about your swim program. Please let Lauren know how much we appreciate her efforts!
Thanks & see you soon –
Leah

Kelly had a tough qualifying race at Divisionals and placed 16th, just enough for a spot at the county championship meet but as a last place seed. She ended up winning. She is the Fairfield County 8U breastroke champion! Outside of her first summer at Rocky, she has never done more than take lessons from you! 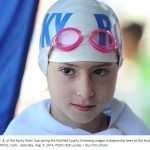 Lyly –
I just wanted to THANK all of the SportsPlex ladies for teaching Colton to swim. We just spent 10 days in Anguilla and Colton spent everyday in the pool. Day 1 we went to the pool and he started walking towards to pool and a man (Justin) that works at the hotel said OH OH watch him, I said no you watch him and Colton just jumped in and Justin’s jaw dropped. I went to a restaurant next door the next day and showed the waitress the video of him swimming (after he jumped in – we go there every year and have become friends with the people down there) she goes OMG, that is him?? We had three people coming in talking about this little boy who was around two/three that can swim.

Three days later a lady saw him jump in (I was standing about 5 yards away but she didn’t speak english and didn’t understand when I was yelling HE IS OK), she jumped in after him!!! Fast forward a day and there was a live raggae band, we had been waiting an hour for lunch and Colton really wanted to go in the pool. I finally gave in and let him go, he ran over and jumped, I was walking slowly behind him and the singer almost went to jump in after him……all of the people that had been watching him swim all week were hysterical laughing, good thing he heard me or he was going in after him too, in jeans and a polo shirt. 2 hours later another man almost did the same thing!!

Oh and please tell Paula (and the other ladies) that he was swimming on his stomach and flipping over on his back and kicking to show off! And his kicks (on his back and stomach) were producing a lot of splashes when he realized people were watching! He was also jumping from the steps too to try and do a forward roll that he saw other much older kids do! The picture I attached was of him jumping from a small bridge over the pool!!! He has no fear!!

So THANK YOU ALL SO MUCH! It made vacation so much easier for me and so much more relaxing to know he was ok.

And we got a few laughs from it! 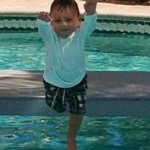 I just want to let you know how impressed I am with Lyly’s method of teaching. She had my son (a four year old, who started off pretty fearful of the water) swimming after just four short lessons! She made my son comfortable with the water. Her encouraging method helped so much that he was willing to jump and put his face all the way in the water and swim a short distance. Her easy approach builds on the kid’s confidence and challenges him to do more. He’s about two months into lessons with her, and he swims the whole length of the pool all by himself. He’s got water safety down pat and is ready for the summer.

My name is Jack Whitney and I am Alexa’s Grandfather. From time to time I accompany Alexa to her swimming lessons. Her swimming instructor is Annabelle Lemes. Upon observing Annabelle instructing and interacting with Alexa during the lesson, I am compelled to write this letter on her behalf.
Thank you Annabelle for all the hard work and skill you put into your lessons. Your efforts have certainly paid off with Alexa; she is no longer afraid of the water and loves to swim. You have helped to develop Alexa’s skills to the point where she is now mostly able to swim on her own with pride and confidence. We are all so proud of her!

Alexa is so happy to have you as a swimming instructor and she always looks forward to her lessons as so do I; keep up the great work!
Sincerely,
Jack Whitney